All good things come to an end, but what an end! Having opened ten days ago to a packed house for a recital of superb musicianship by the Horsham Symphony Orchestra and Ensemble Reza, it closed last weekend with two more capacity audiences for events different in character and style – Dominic Ferris and the Magnificat Choir from Hungary – but both equally compelling. In between there were two more sell-outs, and never more than the odd seat unfilled for the rest.

Two things were particularly in evidence throughout the Festival. The first was not just the numbers who turned out for one or more of the events (and several more often than not), but the enthusiasm and enjoyment they displayed. The other was the high level of sheer musical skill that the musicians themselves gave us. Every single one seemed to be at the top of their game, and several commented afterwards that the appreciation coming back from the audience drove them to give their very best – and it showed. To pick individual highlights is impossible and unfair. Nevertheless, the most heart-warming were the performances of the young musicians from mid-Sussex schools in the Rising Stars! event, who showed us our musical future is secure in hands like theirs, whether vocally or on the violin, cello, piano, flute or ‘minor swing with carava’. The sustained applause they got was very well deserved.

There was one minor disappointment. The wonderful Plastikes Karekles quartet, led by Pavlos Carvalho, had been scheduled to give us their evening of Greek folk music at a picnic event in a beautiful garden. They gave an enchanting performance all right but, alas, the heavy rain ruined the al freco idea and Holy Trinity Church gave us last-minute shelter. No matter. The picnics came inside, the audience were soon dancing around the nave with undiminished enthusiasm, the children joined in and, if you closed your eyes, you could still just about imagine yourself sitting outside a Greek taverna!

No Strings Attached gave a great evening of a capella singing to a packed Hayloft at the Talbot. The Speakeasy Revival Orchestra gave us a real fun evening, at which more Butcombe beer went down appreciative hatches than on any other evening. Caroline Tyler was on superb form (but when is she ever not?) at a rapt and very well attended lunchtime recital; and the Mark Edwards Trio displayed musical virtuosity that was often breath-taking.

And so we arrived at the last weekend of the Festival. Dominic Ferris’s astounding skills on the piano have already achieved worldwide fame, so another capacity crowd was no surprise, and it certainly wasn’t disappointed as he transitioned seamlessly from light to pop to film to classical; and in between Jane Haughton, Michael Maine and Dominic himself treated us to lively comic vocal exchanges. The curtain finally came down on the Festival last Sunday as we welcomed the Magnificat Choir from Fot in Hungary who gave us a first half of English church music and Hungarian folk song performed with a quality of performance that was recognised with prolonged applause, to the delight of the Choir itself. Our very own Cuckoo Choir brought to Festival to a close with a programme of madrigals, including an arrangement of Sting’s Fields of Gold, but finished by inviting the audience to join them in a rumbustious Doing the Lambeth Walk! And why not? It was all a lot of fun. 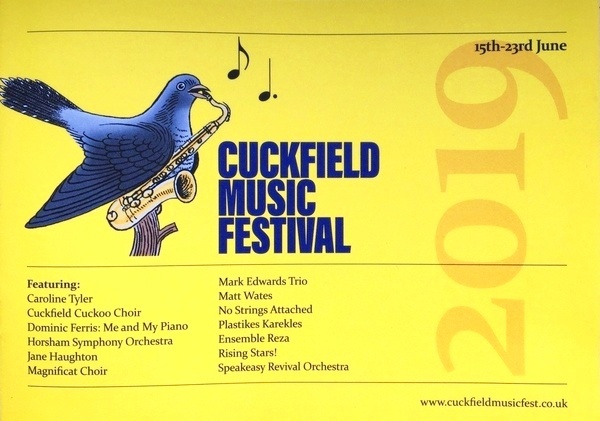 This new, exciting programme of events takes place between 15-23 June this summer in and around Cuckfield. From European performers to local school children, to professional jazz singers, the Festival brings together a variety of music for all ages. To spread the message and make this event accessible for all we need your support. Please consider a donation large or small to help us meet our fundraising target. Donate

A Special Thanks to Our Sponsors